Fish, believe it or not, need water. Though this may not be a shocking revelation, it does make predicting what might happen to fish when the waters they depend on disappear rather simple. Imagine being confined to a small, swelteringly hot room with a limited amount of oxygen to breathe that nearly disappears overnight. You cannot escape, and you realize that you are ill-equipped to survive very long under such conditions. That scenario does not sound very pleasant, does it? In the years ahead, scientists expect climate change to increase both the length and number of drought events here in the Kansas Flint Hills. But how will aquatic organisms like fish fare under these drier future climatic conditions? As the sweltering summer heat and the historic drought that accompanied it lingered on, this question spurred researchers at K-State to investigate.

On August 29th, K-State biology Ph.D. candidate Garrett Hopper delivered a Science on Tap presentation on drought and its impact on prairie stream fish communities in Kansas. Garrett discussed how this summer’s prolonged extreme drought presented an opportunity for researchers to study how Kansas fishes might respond to these droughts in the future.

All summer long, Garrett and his colleagues sampled the fish communities at sites along King’s Creek at Konza Prairie Biological Station as the once flowing creek dried out into disconnected pools to monitor changes, such as whether common species moved out or died off, and which species could hang on longer than others. Every couple of weeks, they would use nets to catch, identify, and count fish from pools in King’s Creek. Over time, they observed that continued drought led to a complete shift in which species was the most common in these pools. This could have huge consequences for the natural processes taking place in these streams and the organisms that rely on these habitats.

It has generally been assumed that prairie fish are well suited for environments with seasonal drought, but under extreme scenarios, some species perform better than others. They found that some of the native species – like the southern redbelly dace (Chrosomus erythrogaster) – did not cope well with the conditions brought on by drought, whereas a non-native fish – the western mosquitofish (Gambusia affinis) – seemed better able to persist in these stressful conditions than the native fishes. Garrett hypothesizes that the western mosquitofish may have adaptations to deal with high temperatures and low oxygen levels allowing them to outperform native species. Garrett discussed his plans to continue sampling these streams to track how these species recover following such an extreme drought.

After Garrett’s introduction, he had the audience break out into small groups that were each assigned a Kansas fish and tasked with brainstorming examples of threats these species face. Examples of threats included: dams, which fragment habitats and block fish movement; groundwater extraction, which alters the natural flow regime of streams; land use changes due to agricultural conversion, which can increase runoff and soil erosion into streams; and non-native fish introductions, which can harm native fish species through increased competition and predation. For example, the peppered chub (Macrhybopsis tetranema) is an endangered minnow in Kansas that has experienced population declines due to the construction of small dams and groundwater depletion. Hopper concluded the evening by facilitating a Q & A session that covered topics ranging from non-native species introductions and management to actions that people can take to protect native stream fishes.

The next Science on Tap is Wednesday, October 17th at 7:00 PM at the Tallgrass Tap House in Manhattan. K-State master’s student (and Science Snapshots’ Web Manager!) Sarah Winnicki will discuss her work on brood parasitism in grassland songbirds at the Konza Prairie Biological Station. For more information, check out the Science on Tap website.

This post is part of our series covering Science on Tap. This monthly event, a part of Sunset Zoo’s Behind the Science initiative, is a gathering at the Tallgrass Taphouse during which a featured scientist shares their research and engages with the audience in a lively conversation about the topic. Hopefully you are able to join in on the next conversation; if not, we’ll be here to provide a summary of the research that was shared! 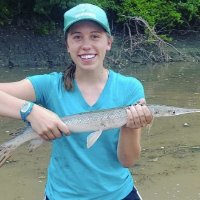 This post was written by Liz Renner, a Ph.D. student in Keith Gido’s lab studying the influence of gizzard shad on food webs in Kansas lakes. Liz is also the Science Snapshots Social Media Manager.